Welcome to the new SANDAG.org! We know things look different and are here to help. Hope you enjoy the new site!

The beaches along the San Diego region’s shoreline are among our most beautiful and valuable recreational and economic resources. Unfortunately, over the past 40 years, the forces of nature and development have led to the steady erosion of our region’s coastline, with the loss of sand on the county’s beaches one of the most noticeable effects.

As part of our Shoreline Management and Monitoring programs, SANDAG and its partners have worked for several decades to address the problem with several projects that have restored sand to beaches to preserve this vital resource.

SANDAG’S most recent effort was launched in December 2021 when it partnered with Caltrans, the City of Encinitas, and California State Parks on the Cardiff State Beach Sand Replenishment project. Caltrans and SANDAG crews have installed a pipeline to pump 63,000 cubic yards of dredged sand—the equivalent of 19 Olympic-sized swimming pools—from San Elijo Lagoon, under the Interstate 5 bridge, and onto the state beach.

The sand transfer will also benefit the San Elijo restoration project, a partnership of SANDAG and the Nature Collective. The construction for the San Elijo Restoration Project finished in Spring 2022. The channel under the bridge was made deeper and wider which will assist tidal circulation, improve the quality of water and habitats within the lagoon, and lead to greater wildlife diversity.

SANDAG’s previous beach replenishment efforts include a 2001 project that pumped two million cubic yards of sand onto 12 badly eroded local beaches. SANDAG’s monitoring program studied how sand moved from the initial 12 beaches and spread along the region's 60-mile coastline. The U.S. Navy, the California Department of Boating and Waterways, and the region’s coastal cities funded the $13 billion beach sand project.

In 2012, SANDAG placed 1.5 million cubic yards of sand on beaches in Imperial Beach, Oceanside, Encinitas, Cardiff and Carlsbad. The $26 million project was funded through the California Department of Boating and Waterways and the region’s coastal cities. 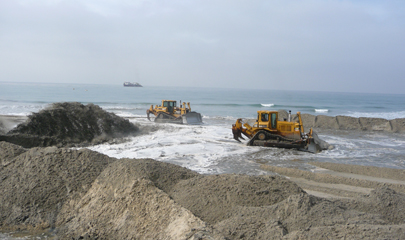 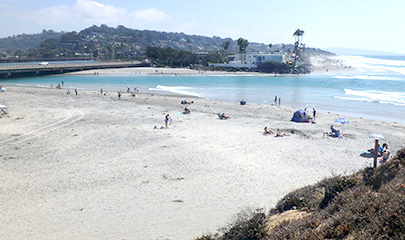 Before and After Photos of Beaches (ZIP)

Certification of Final Environmental Impact Report for Regional Beach Sand Project II - Board of Directors, May 27, 2011